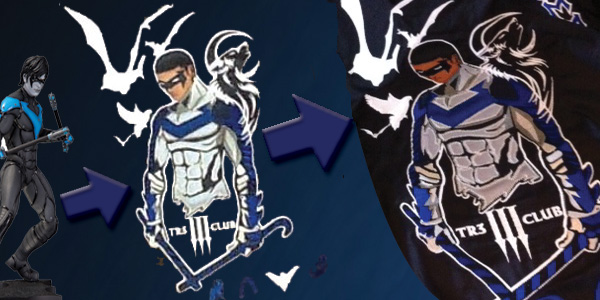 As we're heading into the fall we've been super busy filling orders. Neos are gearing up for their first homecoming on their respective campuses. Prophytes and other old heads are gearing up for reunions, probates and other events. And our good friend Marvin has been saving up and planning to order his special one-of-a-kind Greek jacket for a while.
The Dream

The Sigma from Southern Polytechnic State University has frequented our retail Greek clothing store, Zeus' Closet on several occasions. He and his chapter bruhs ordered other pieces of Greek gear in the past. They got a feel for the quality of our work and decided that we would be the ones to create their Greek gear from now on. When we asked Marvin where the idea came from he told us it came from, "a name given to me by one of my prophytes, Charles. The name NIGHTWING is a representative of a young superhero who, from the shadows of his mentor, grew to greatness himself."
The Design
He continued on by saying, "I crafted the image making sure that it was more than just an image. I wanted to add a sense of graphic artistry to it. In the design I make reference to my founders, line brothers, and chapter in ways that compliment the actual image of Nightwing." Each aspect of the design was clearly well thought out and crafted down to the "ninja" themed picture as an ode to martial arts. Marvin made it very easy on us. He had an exact image, our artists digitized it quickly, and the rest is history. It is a no brainer that this jacket should be a serious contender for the Greek jacket of the year competition this year.
The Delivery
When asked about the production process, Marvin told us, "this experience was very involved. (..It) allowed me to express my creativity in a way that was unhindered.I knew that only stuff4GREEKS would have the ability to produce such a high quality item with spot on precision. Everyone who has seen it so far has either recognized immediately that the jacket is stuff4GREEKS quality or they are rushing to find out who this company is and how can they get such an impressive piece of Greek paraphernalia." The answer to that is simple. Click here to begin working on your masterpiece today.