The Dream
The honey badger, also known as the ratel, is a species of mustelid native to Africa, Southwest Asia, and the Indian Subcontinent. Despite its name, the honey badger does not closely resemble other badger species;  Nor is it anything sweet.  It is primarily a carnivorous species and has only a few natural predators because of its thick skin and ferocious defensive abilities. We have reason to believe that anyone with a line name of Honeybadger has to be a tough character. Check out the custom artwork on the back of his Greek line jacket if you don't agree.

Meet Jesus Gonzalez, also known as the Honey Badger to his Omega Delta Phi brothers. He is a native of Texas A&M International University where he is a part of the Alpha Tau Chapter. We had the opportunity to ask him a few questions about his Greek jacket. He told us that "The idea came with the help of my brotherhood Omega Delta Phi. Having Honeybadger as a line name made it easy to choose my design." By now, we're sure everyone has seen youtube videos, commercials, or t-shirts proclaiming that the "HONEYBADGER DON'T CARE!" Jesus wanted to take things a bit further and get his line name embroidered in an unforgettable way on his custom Greek jacket. Check out the detail in his Greek jacket as his honey badger is devouring a stallion - the mascot of his fraternity's rival Sigma Lambda Beta.   The nickname of honey badger is one that has to be earned.  Many of you college football fans remember the defensive back, Tyrann from LSU.  He was probably the smallest player on the field in stature that made the biggest impact when he was in the game.  Jesus is in good company with this line name and this line jacket is a great way to show it off. 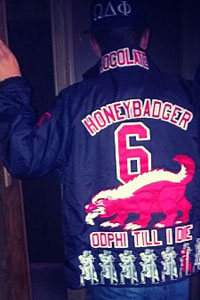 When asked about his Greek gear, Jesus let us know that he, "heard about Stuff4greeks with my fellow Greek friend from Sigma Lambda Gamma. I liked the work on her jacket so I got inspired from her work." Many people loved my jacket, it caught many eyes. I got so many good and positive complements. Awesome work stuff4greeks.com!!!!"  If you don't get anything else from this post, you should learn not to mess with the Honey Badger because the Honey Badger don't care!  That, and we make the best Greek gear in the business.  Click here to read other spotlight stories, and here to begin yours today!